Sultanahmet is hot, the sun bakes the domes and minarets of Ayasofia, the Blue Mosque, the Hammam and the surrounding buildings. The air cools as we descend into the ancient Basilica Cistern below. 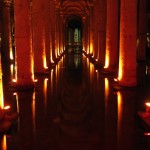 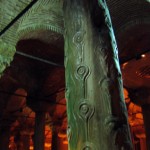 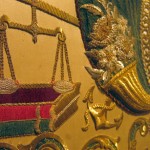 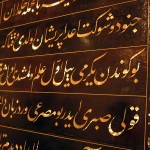 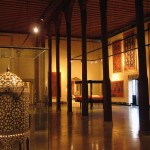 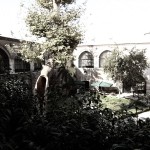 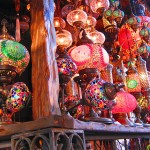 Built under Emperor Justinian in 532, the massive cistern was fed by 20 kilometers of aqueducts. 336 columns support the vaulted brick ceiling as subdued lighting provides compelling views across the length of the structure, and faintly illuminates the ghostly carp swimming in the water below. At the northwest end, two massive Medusa heads form the base of pillars, one carved sideways, the other diagonal.

The cistern actually exceeds Ali Sun’s expectations, a rare feat given her vivid imagination. It is cool, damp, water drips from the ceiling. Fifteen hundreds years is a long time – the centuries are weighty as we take it all in. We climb the brick steps into a modest gift shop, buy some great postcards, emerge into the sunlight.

We stop for çay next to the Blue Mosque. The delicate gold rimmed çay glasses are ubiquitous and charming, the black tea always served in a saucer with a little spoon and a couple sugar cubes. At its most expensive, çay (pronounced ‘chai’) is 4 Turkish Lira, about $2.25. At little local çay shops, you might pay 1TL or less.

To the Museum of Turkish & Islamic Arts, located in the former Palace of İbrahim Paşa, built in 1524. The world-class museum hosts a wealth of Islamic calligraphy, art, metal work and paintings, but it most well-known for the finest collection of antique carpets in the world.

We spend hours wandering through, amazed at the level of detail, artistic craftsmanship and outright beauty of the Islamic art. We see doors, carvings, Korans, government documents, praying rugs, giant 30 foot carpets and much more.

South of the main square we wander, through the picturesque, touristy neighborhood full of boutique hotels, trinket shops and restaurants with prices in Euros. We have a nice dinner at highly-rated Asian and Indian restaurant Dubb Exotic. Then back on the tram, across Galata Bridge, up the Funicular to Tünel and a short walk to home.