Montmartre sits at the highest point of Paris. It is topped by the basilica of Sacre Coeur, as close to God as a Parisian might hope to get, at least in terms of altitude. We visit at night. It is wet, but not rainy. 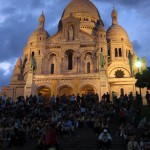 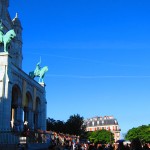 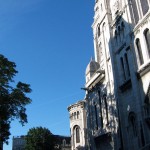 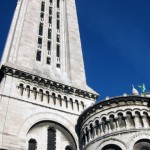 It is three weeks later. We leave Paris on Wednesday. Ali-Sun and I return to Sacre Coeur in the afternoon, with the sun bright but not hot.

We walk to the park nearby, a small patch of grass on an angle, sunlight now disappearing behind the trees. Parisians lay out, talk on cell phones and to each other, drinking rosé, rolling their own.