A rock hurtles through space, lonely, passing through the solar system as the third planet from the sun draws near. The rock is the length of half a football field, entering the atmosphere at 34,000 miles per hour. The molecules encased on the outer layer ignite, turning the rock into a giant terra-bound fireball of death and destruction.

Ten seconds after entering the atmosphere, the rock slams into the Arizona desert with the force of a nuclear explosion. The iron-nickel rock vaporizes. The crater it leaves behind is nearly a mile across.

50,000 years later, AliSun and I are driving east on Interstate 40, when signs appear to turn to 1610 AM. The deep, intoning radio voice crackles then becomes clearer. We are mere minutes from Meteor Crater. 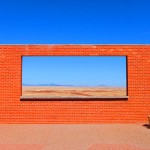 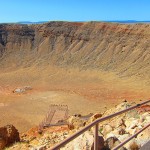 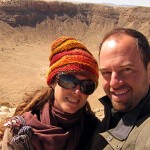 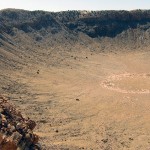 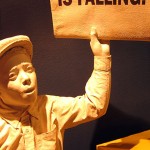 It’s still a long drive to Santa Fe. Should we? Yes. Six miles into the desert. We park with dusty RV’s, Mazdas and Oldsmobiles. $16 each, really? But now we’re only ten yards or so from the rim, so of course.

Meteor Crater is a big huge hole in the ground. And it is pretty damn awesome. We view it from three different platforms, we look through telescopes at the cut-out astronaut on the crater floor.

We are there for almost two hours. An old guy in plaid and denim talks confidently about alien technology. We enjoy the extensive museum inside.

As we walk back out to the car, I think, absolutely, that was worth it. Best. Crater. Ever.