It is Sunday morning. The night before is off-and-on loud, but I sleep soundly due to too much vino tinto y sangria on Friday night. The morning is leisurely, stretching into the early afternoon. We are on our devices, a bit of work, a bit of browsing.

We say goodbye to new friends Ramak, Melissa and Felix – they are off to Bocas Del Toro. We lived a few houses away from Melissa on Warren Ave. in Venice over a decade ago without knowing her. The world can be so small and close, friendly and inviting, playful and synchronous.

We hail a taxi, I negotiate a ride to the Panama Canal and back, and we are on our way. 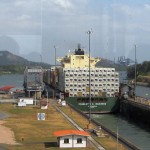 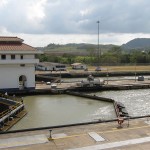 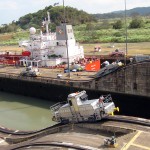 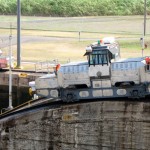 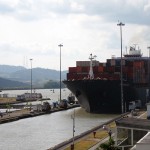 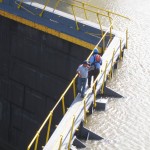 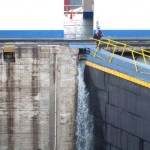 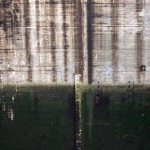 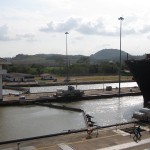 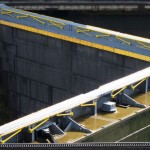 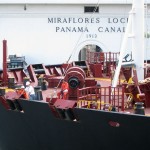 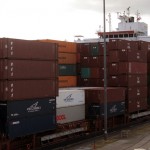 I have discovered a new linguistic challenge. My Spanish has improved enough for me to speak in more or less complete sentences. This is apparently taken to mean that I have a comparable sense of comprehension. Whereas prior, speaking only a word or two meant an equivalent response, I now receive a rapid-fire reply, to which I am almost completely oblivious, and must then reply repite? or que?

At Miraflores Locks, we avoid the hordes of American tourists on the lower deck by arranging to eat with the hordes of Latino tourists in the upper restaurant. The food is average and expensive, the view, well, priceless.

Massive container-bearing ships are brought through one of two channels in the canal by towing locomotives. A vessel stops in front of the closed locks. The crew comes out to the bow, enjoying the sun, waving at the tourists, who wave back.  Water drains from the east side of the lock, lowering a ship the size of the Empire State Building fifty or so feet to the level of the Pacific Ocean.

Over the loudspeaker, in Spanish then English, a woman announces the vessel:  This is the SS Zimmerman, en route from Hamburg, Germany to Seoul, South Korea, where it will arrive in 23 days.  It carries furniture, auto parts and schnitzel.  It weighs three gazillion tons.

The lock opens, the ship is guided through, the Pacific Ocean beckons beyond. This process might take twenty minutes. It is staggering in scope and efficiency. Even Ali Sun enjoys it, although the trees half a mile away catch her eye.

We meet our driver Rodolfo, he sings along to canciones de amor on the radio, Sunday traffic is light. We pause at home to write, connect, pack before dinner. Tomorrow we arrive at LAX and drive to Orange County, where we will seek and consume large quantities of dark green vegetables.