(from the journal, August 18th) The bus from Zagreb to Split is five and a half hours with one bathroom break mid-way. You do the math. We pull up to the mid-point – a gas station and a 24-hour restaurant. The front and mid-cabin doors open and women hit the ground at a full sprint towards the facilities. Many, many cigarettes are smoked, glutinous breads of dubious origin are consumed, the bus fills back up, we carry on.

In Split, the bus station, train station and port converge in one location. Busses arrive from throughout the Balkans, trains rumble down from Istria and Zagreb, the port is filled with ferries and cruise ships. This point of convergence has more than its fair share of pizza joints, money changers, suvenir stands and ice cream of unnatural colors. Old ladies in plaid wool skirts hold hand-written signs offering “Apartmans” for rent.

Following are photos from the Split city center, its origins from the fourth century, later built up as a fortressed palace by the Roman Emperor Diocletian. That’s Ivy, our fine host, there with Ali Sun and myself. In the seventh photo, taken of the plaza with the columns, those mis-matched columns were looted in raids on Greek and Ottoman cities a thousand or so years ago and transported via sea to Split. 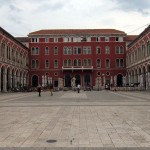 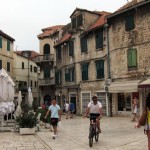 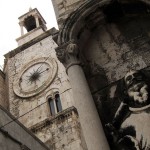 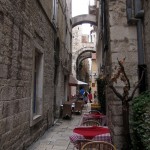 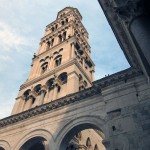 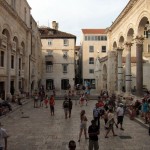 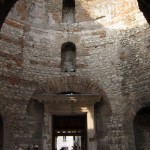 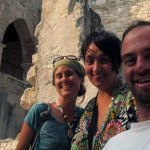 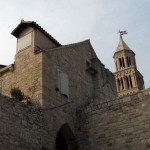 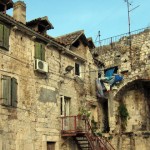 We haul our bags across the road, take a deep dieselly breath. Ali Sun spots Ivy fifty yards away. Is that Ivy?, she says. I jog down there. Yes, it’s Ivy. We hug. She drives us through Split down streets so narrow she occasionally has to pull in her side mirror. She parks so close to a low stone wall she has to climb out the passenger door. Because that’s what locals do in Split.

Two blocks to the house, I have to carry our eighty pounds of rolling bags down cobblestones and steps most of the way. We enter the courtyard with the hammock swinging below the climbing grape vines full of green grapes ready to harvest.

The kids are napping. We didn’t know Ivy has kids, but yes, and they are napping. We haul in our bags to our own private little guest house. Within thirty minutes, Ali Sun is unpacked and has set up at least two altars. I have set up all four devices on wifi, cleared a workspace and am charging the laptop and a phone. What a team we are.

The travel sites all suggest Buffet Fife – its where tourists sit at long tables aside local fishermen and eat copious amounts of beef, fish, shellfish, bread and vegetables. We dine inside on a plate of whole grilled fish, a cauldron of lamb, grilled peppers, mashed potatoes and house wine that has the peculiar taste of paper.

The food settles in our bellies, the sun settles beyond islands to the west, we settle in to our two and a half week stay in Split.