I awake as the plane dips below the cloud layer above Aberdeen. Rows of stone houses, housing projects and industrial buildings tuck amid green trees and greener fields. Four large shipping vessels are docked off the shore, no port or pier in sight.

Low, rolling hills surround Aberdeen Airport. The air is crisp and cold as we descend the steps, walk across the tarmac and through the terminal to Baggage Reclaim, located next to the airport pub.

The bags come quickly – I’m in the loo as Ali Sun liberates them from the belt. Twenty yards from the terminal is the taxi row. Grey-topped, rosy-cheeked and smelling of cigarettes, the driver ushers our bags into the back of the Benz, slides into his seat on the right. 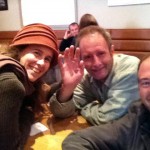 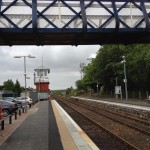 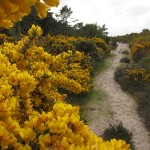 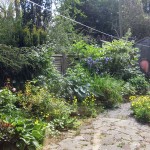 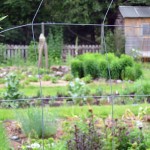 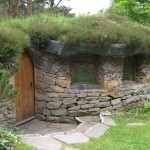 Ten minutes and ten quid later, we’re alone at Dyce Railway Station, a tiny stop the posted schedule tells us is eleven minutes from the origin of the line in Aberdeen proper. With nearly two hours until our train, I buy our tickets to Forres from the kiosk. Time and price match my web research. I put £42 on my British Airways Visa, receive our tix and pump my fist in celebration of a minor victory.

We roll our bags a block; the Spider’s Web Pub is open. We grab a table, order two pints of Guinness. On two TV’s is a darts championship complete with emcee, show girls and an adoring crowd. On the other, the French Open – Nadal en route to defeating Djokovic for the title.

Our bowl of chips arrives. A local ambles over, introduces himself, welcomes us to Scotland. My name is John the Mason. You see, I’m a stone mason, he says, his hands chiseling with an invisible pair of tools.

John squats next to the table, we chat for a few minutes. He offers us a beer, I politely decline. The chips are great.

Ali Sun and I talk. John smokes a couple cigarettes on the patio. I get up to use the restroom, sit back down.

John comes over with two Scotch whiskeys, a glass of ice and small pitcher of water. I bring these to you out of decency. If you don’t want them, no offence taken. It’s only out of decency, you see.

We have been in Scotland all of half an hour, and find ourselves in a pub drinking Guinness and Scotch, the latter compliments of a fine local chap named John the Mason. This leg of the trip is shaping up to be quite hospitable.

Half a dozen stops fifteen or so minutes apart. Elgin with a hard g behind us, we arrive in Forres, John and Alastair are waiting. We pull into the Findhorn community, people smile or nod. John shows us to our residence, Cornerstone, occupied for twenty years until 2006 by the dearly departed co-founder of Findhorn, Eileen Caddy.

Lovely dinner at the Community Center, then a ninety minute tour with John around the grounds. We are way north – approaching midnight, the light gives way to a dusky twilight, rising again before five a.m.

We are home at nine-fifteen; I am asleep by nine-thirty. Ali Sun takes a walk, meets the trees, enjoys the middle of the night light. I sleep deeply.